I was living by faith as a Bible college student. The end of one semester had arrived, and I faced the deadline to pay my bills to enrol for the next semester. I needed $2,000 by the end of the day. But I only had $200 in my bank account. I was in my dorm room praying. Lord, you promised that you would provide for my needs. I need your provision today. I felt the Lord speak to my heart reminding me of words I had heard somewhere before. “If what you have in your hand will not meet your need, it can’t be your harvest. It must be your seed.” It occurred to me that the $200 in my account was the tithe of the $2000 I needed for school. Isn’t it amazing that, as 2 Corinthians 9:10 says, God even provides the seed for the sower!

I knew what the Lord was asking me to do. He wanted me to trust Him. Lord where should I give my seed? Just then, there was a knock at the door. When I opened, one of my classmates stood there with tears in his eyes. “I’ve come to say goodbye,” he said. That day was the deadline for the deposit on his dorm room, and he did not have enough. “How much do you need?” I asked. He said, “I need $300, but I only have $100.” “I have the other $200 for you,” I said with joy. I wrote the cheque and gave it to him. I shut the door, got back on my knees and prayed again. “Well Lord, I’ve cleared out my account. Now there is plenty of room for you to bless me,” I said almost tongue-in-cheek. Later that day I went to the local public library to check my email. A message had arrived from my father. He said that he had received a cheque in the mail for me. It was from an old family friend who felt led to send it for my school expenses. It more than covered the $2000 I needed.

That was one of the first times I experienced a financial miracle. Although today I often face financial needs in the millions of dollars, the principles I learned as a Bible college student still hold true. The Holy Spirit was teaching me that Jesus wants to be Lord over every area of my life – including my finances. But this is not because He needs my resources; it is because I need His. He wants my life to be blessed, and whatever is put into His hands is blessed abundantly! Reinhard Bonnke told me that the Lord once spoke to him saying, “For every deadline I will throw you a lifeline.” Yet God’s “lifelines” often look like risks. He asks us to surrender what is ours so we can receive what is His.

First Kings 17 tells the story of how ravens fed Elijah by the Kerith Brook during a severe famine. After the brook dried up, the Lord spoke to Elijah: “Go and live in the village of Zarephath, near the city of Sidon. I have instructed a widow there to feed you” (1 King 17:9 NLT). On the surface, this verse sounds like God sends Elijah to the widow so she can take care of him. But that doesn’t make sense. Widows in the ancient world were usually poor and destitute – all the more during a famine.

God could have sent Elijah to the richest man in Israel. For that matter, God could have continued to feed him supernaturally as He had been doing. Why then would God send his hungry prophet to a woman with the least to give? There is only one possible answer. God didn’t send Elijah to the widow to provide for Elijah. God sent Elijah to the widow to provide for the widow. But notice how the miracle God wanted to perform for the widow was contingent on an act of obedience and trust. Her “lifeline” looked more like a noose to natural eyes. She had to give her last bit of flour and oil to Elijah before using it for herself and her son. Yet her willingness to obey and trust God opened a fountain of blessing that she could never have imagined!

If you want your finances to be blessed, the Lord will ask you to put them into His hand. He wants to be the Lord over every area of your life because He wants every area of your life to flourish. Money is not just about “money.” It represents an area in our hearts that has deep significance. God wants to rule that area like every other. Sometimes we separate finances from life in God’s Kingdom. We may not say it that way, but it’s often implied by the way we operate. We either make finances too central in our focus (as a point of worry or lust), or a taboo issue we are afraid to address. But Jesus did neither. He boldly taught disciples that a major part of their lives was the way they related to money. Stewardship of our finances reflects the depths of our heart, and influences the world for eternity. It is a major issue. That is why we must give Jesus full dominion of that area of our lives. 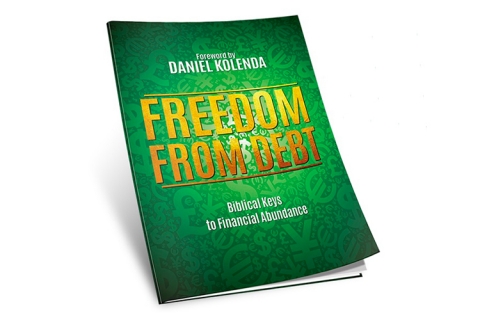 Order Your FREE copy TODAY for a donation of any amount.

10 Insights into the Biblical Perspective on Debt

Following God’s direction in the Bible is key to financial turnaround. God desires to bless you! I invite you to step into His abundance and be transformed by the renewing of your mind through the Word of God.

8 Ways To Exercise Your Faith For Financial Breakthrough

The Lord wants to speak to you through His Word to encourage you, build your faith and let you know that He is right there to walk with you through whatever you are facing financially.

13 Steps to Breaking the Cycle Of Debt

This study contains a wealth of wisdom from the Word of God. It is filled with God’s promises, His principles and His thoughts about your financial wellbeing. God desires to bless you!

10 Blessings When You Align Your Heart

God desires to bless you! I invite you to step into His abundance and be transformed by the renewing of your mind through the Word of God.

The Financial Potential of Christians

Redeeming Finances in the Kingdom

A crucial aspect of Jesus’ teaching was His disciples’ stewardship of their financial resources. We know the verse well, and quote it often. “But seek first the kingdom of God and His righteousness, and all these things shall be added to you” (Matt. 6:33).