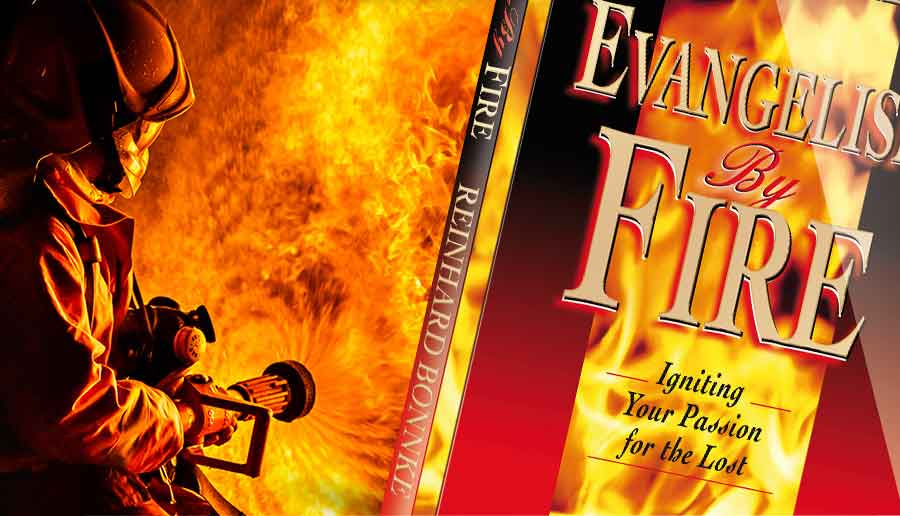 WHEN ARSON IS NOT A CRIME!

God sets driftwood on fire. Dry old sticks can burn for God, just like Moses’ bush did! Hallelujah! I do not pray, “Let me burn out for Thee, dear Lord.” I do not want to be an ash heap. The amazing feature of the bush was that it did not burn out. Too many of the Lord’s servants are burning out.

The cause of that is some other kind of fire. I say instead, “Let me burn on for Thee, dear Lord.” The altar flame should never go out. Without fire, there is no gospel. The New Testament begins with fire. The first thing said about Christ by his first witness concerned fire. John the Baptist, himself a “burning and shining light” declared that: “He will baptise you with the Holy Spirit and fire.” (Matthew 3:11)

The gospel is a fire lighter. The Holy Spirit is not given just to help you preach eloquent sermons. He is given in order to put a flame into human hearts. Unless Christ sets you alight, you can bring no fire to earth.

“Without me, you can do nothing,” said the Lord (John 15:5). Jesus instructed the disciples not to do anything until they were to receive “power from on high” (Luke 24:49). When that power came, the Spirit revealed himself as tongues of fire sitting upon each one of them.

Then there appeared to them divided tongues, as of fire, and one sat upon each of them. (Acts 2:3)

Jesus previously had sent the disciples out in pairs (Luke 10:1). It reminds me of Samson sending foxes out two by two, as the animals carried torches for an arson raid on the enemy’s corn shocks and vineyards (Judges 15). The disciples also were sent out two by two, carriers of the divine torch, incendiaries for God, scorching the devil’s territories with the fire gospel.

They were new Elijahs bringing fire from heaven. Until the fire falls, evangelism and church activities can be routine and unexciting. Pulpit essays, homilies, moralizing or preaching about how you think the economy of the country should be run – all that is glacial work. No divine spark brings combustion to ice. No one goes home ignited. In contrast, the two who listened to Jesus on the Emmaus road went home with warmed hearts. I am sure that he did not talk politics to them, nor offer suggestions and advice. That would not make their hearts burn. Jesus came “to send fire on the earth” (Luke 12:49). The mission of Jesus is not a holiday picnic – Satan is determined it will not be. He is a destroyer. The Lord sends out his servants with a warning of physical dangers.

Only Jesus baptises in fire. The Holy Spirit puts a flame into human hearts. And do not fear those who kill the body but cannot kill the soul. But rather fear him who is able to destroy both soul and body in hell.

What is mere physical hurt, compared to a life ablaze with the joy and zest of Jesus? What is bodily danger compared to the crown of life, or to the wonderful work that he gives us to do?

Heal the sick, cleanse the lepers, raise the dead, cast out demons. Freely you have received, freely give. (Matthew 10:8)

Fire is the ensign of the gospel, the sign of the Son of Man. Only Jesus baptises in fire. When we see such baptisms, it is the evidence that he, and nobody else, is at work. It is the identifying hallmark of his activity and of true Christian faith. Put your hand on such activities, and you will feel the heat. The prophet Elijah made the same point:

The God who answers by fire, he is God. (1 Kings 18:24) Only one God does that and Elijah was sure that Baal was incapable of it.

What does your spiritual thermometer read? Does it even register? Are you chilled? Are there cold altars in the Church? Worship without warmth? Doctrines heated only by friction? There are theologies and teachings as fireproof as asbestos. There are religious books that only provide heat when put on a bonfire. Such faith-chilling items have nothing to do with the Christ of Pentecost.

Whatever he touches catches fire. Jesus melts the ice. Some church efforts to whip up a little enthusiasm are, spiritually, like rubbing two sticks together.

The fire of God is special. In fact, it is unique. Only the fire of God was allowed on the altar of Moses, not fire produced by any human means. Nadab and Abihu made fire themselves, and lit their incense with it. It was labelled “profane fire.” Divine fire went out from the Lord and killed the rebel priests (Leviticus 10:1-2).

Today, we have profane fire being offered. There are strange gospels, which are not the true gospel, but theologies of unbelief, the thoughts of men and their philosophies, criticisms and theories. They bear no trace of the glory-heat from heaven. Nothing in them produces any combustion except controversy.

What lies behind all this is something that my friend Paul C. Schoch pointed out to me. He quoted Matthew 16:23, where Jesus addressed Satan when speaking to the Apostle Peter:

He simply cannot grasp God’s outlook at all. That is strange when you remember that he was originally Lucifer, a throne angel of God, the “covering cherub.” Jesus bruised the serpent’s head, and I think he inflicted some kind of brain damage upon the devil! He is disoriented. Once Lucifer was full of wisdom, but today as Satan, the adversary, the accuser of the brethren, that prince of the power of the air is baffled by what God is doing, and especially by what the Lord did at the Cross.

This type of confusion is brought on by sin. Just as Satan thinks like men, so do men think like Satan. They, too, find the Cross foolishness and cannot grasp the things of God, as the Apostle Paul remarked. Paul also could not “see” it at first. Cold fury against the believers ate away in his heart. He was a “dragon man,”He was a “dragon man,” breathing out threats and slaughter. Full of zeal, his brain was full of clever unbelief. Scales fell from his eyes, though, when he believed.

SATAN IS BAFFLED BY WHAT GOD IS DOING

I wonder if hell would like to send espionage agents into the Kingdom of God, just to see what secrets are there. The demons would not understand these secrets, anyway. Hell is completely baffled. To Satan, Christ’s sacrifice is a deeply rooted plot devised by God for his own personal advantage. The devil devours others. That is his evil nature. If we were to fight the devil on the level of human thought, we must remember that he thinks as men think.

Satan invented a human chess game, which he has played for thousands of years. The devil anticipates our every move, and he will checkmate us ten moves ahead. Satan has experience from the time of Adam onward, and he knows every trick of human ingenuity on the board.

You cannot produce faith by the wisdom of words. The devil always has a counter-statement for whatever you say. The gospel did not come out of somebody’s head. A university professor did not give it to us. We have to move into the divine dimension, as there the enemy cannot follow us. The devil is no match for the mind of the Holy Spirit.

The devil is no match for the mind of the Holy Spirit.

If we plan, preach, witness, and evangelize as men, Satan will foil us. He can handle psychology and propaganda. The answer is – move in the Spirit and preach the gospel as it is. Then the arch‑confuser becomes confused and unable to follow the game at all. The devil does not even know the Holy Spirit’s alphabet.

We see this constantly in our Gospel Campaigns. We open the meetings to the Holy Spirit completely. The results are thrilling. Whole countries are challenged by the mighty power of Christ. Where false religion and doctrines of demons previously have prevailed, they are shaken and broken! No preacher could do this, no matter how popular or clever. Such success happens only when God does it his way. When he enters the field, there is a mighty victory. He can, will, and does succeed – every time we allow him to take over.

These breakthroughs are part of the end time blessings that the Lord promised. The Day of Pentecost continued – it did not stop at Jerusalem, but is for “the end of the earth” (Acts 1:8).

I offer this challenge: Begin to work on the level of the Holy Spirit, and you will see the salvation of the Lord. This kind of evangelism will break the devil’s back worldwide, and he will be routed. It is this holy fire that cannot be imitated.

From: Evangelism by Fire

The Gates of Hell will not Prevail

One of my favourite places in Israel is a place that’s known as Banias, known as Caesarea Philippi in the Bible. Today, it’s just a big ruin and archeological dig. But to this day, you can see how otherworldly and strange and mysterious it must have been in its time. The city was built on a huge rock foundation, nestled up against the side of a steep cliff at the foot of Mount Hermon.

You may have heard about Mount Hermon. In the Bible, it’s often associated with strange and creepy things – demonic things. It was famous for idolatry. In fact, more than 20 pagan temples have been excavated there so far. It was the place where Jeroboam built golden calves and shrines to pagan gods and led the northern kingdom of Israel into idolatry.