This secret of Jesus’ ministry has also characterised the lives of great men and women of God throughout history who discovered the incredible power of prayer.

PRAYER IS A PRIORITY

Their years with the Master had taught the disciples one thing about Jesus … He was a man of prayer. Whether in the middle of the day or in the middle of a conversation, it was common for Jesus to steal away to a quiet place where He could have uninterrupted communion with His Father. Jesus loved His disciples, He loved the multitudes, and He loved fellowship and ministry, but nothing was more important to Him than His relationship with His Father.

This secret of Jesus’ ministry has also characterised the lives of great men and women of God throughout history who discovered the incredible power of prayer. John Wesley said, “God does nothing, but in answer to prayer.” The great pioneer missionary Adoniram Judson was known to withdraw from his friends and family seven times a day to be alone in prayer. David Brainerd once wrote, “I love to be alone in my cottage where I can spend much time in prayer.” John Hyde was a missionary to India who earned the name John “Praying” Hyde for his remarkable life of Unlocking The Miraculous Through Faith & Prayer devotion. When his health began to fail, he visited a doctor in Calcutta who made a startling discovery; John “Praying” Hyde’s heart had shifted in his chest as a result of years of gruelling intercession.

It comes as a shock to many Christians that there is anything to learn about prayer. Some think prayer is simply chattering to an invisible man. They think they know all there is to know about the subject like a man who thinks he knows everything about the Atlantic because he has dipped his toe in the surf!

The disciples had been faithful and observant Jews all of their lives, and as such, prayer was something they had practised continually since childhood. But once they had observed Jesus’ life of devotion, they recognised that there were depths of prayer they had never fathomed, and there was much to be learned; thus, the request, “Lord, teach us to pray. Teach us not to recite memorised words or fulfil a religious duty. Teach us to touch heaven and to impact the earth. Teach us to be fervent and effectual, to move mountains, to break chains, to cast out demons, to heal the sick, to raise the dead, to impact cities and nations, to change the course of history and bring heaven to earth. Teach us to really, really, really pray!”

I am an evangelist who works on the front lines of the battle for souls in some of the most difficult, dangerous, and remote locations on earth. These words come not from a marble writing desk, but from the dusty trenches where lives hang in the balance. For us, prayer is not a luxury or an accessory – it is a matter of survival. The prophet Jeremiah spoke of a dreadful day that is fast approaching when multitudes of lost souls will declare with eternal regret, “The harvest is over, the summer has ended, and we are not saved.” As the clock counts down the final hours before the end of the age, it is the heart of God that none should perish, but all should come to repentance that motivates us to go into all the world and preach the gospel (see 2 Peter 3:9).

I also believe that the mass evangelism movement and the prayer movement, which have arisen almost independent of one another, must come together if we are to accomplish the purpose God has for us.

Without intercession covering the work of the evangelists, they will not have the steam in their engines to reap this gigantic harvest that is now ripe and ready. Without evangelism and real-world impact, intercession lacks purpose and relevance. But together, they are a dynamic and revolutionary combination that has the potential to change the world!

We hope you enjoyed this Bible Study by Daniel Kolenda. Be on the lookout for the next teaching DISTURB US, LORD. 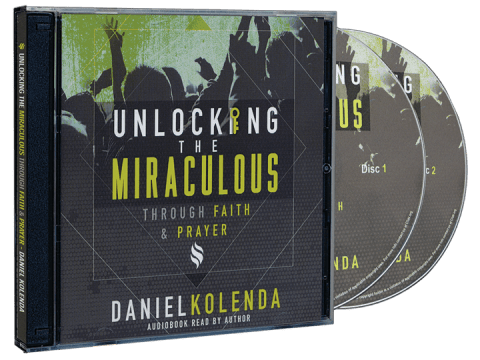 “The prayers of the believers were the power that loosed the chains, removed the obstructions, and opened even the most impenetrable doors.”– Daniel Kolenda

“I find that the more secure we feel, the more danger we are in, because it is in comfort that we can so easily forget our utter need for God.”– Daniel Kolenda

The Gates of Hell will not Prevail

One of my favourite places in Israel is a place that’s known as Banias, known as Caesarea Philippi in the Bible. Today, it’s just a big ruin and archeological dig. But to this day, you can see how otherworldly and strange and mysterious it must have been in its time. The city was built on a huge rock foundation, nestled up against the side of a steep cliff at the foot of Mount Hermon.

You may have heard about Mount Hermon. In the Bible, it’s often associated with strange and creepy things – demonic things. It was famous for idolatry. In fact, more than 20 pagan temples have been excavated there so far. It was the place where Jeroboam built golden calves and shrines to pagan gods and led the northern kingdom of Israel into idolatry.