Complacency is one of the most dangerous enemies of the believer because it is so easy to fall into and, like a vivid dream, it is very difficult to detect in our own lives before we are rudely awakened.

“Be sober, be vigilant; because your adversary the devil, as a roaring lion, walketh, seeking whom he may devour” (1 Peter 5:8).

The pounding at the door seemed to rattle the entire house just before the foot of an impatient Roman soldier kicked it from its hinges. Peter was still in bed and half asleep when the guards grabbed him and hauled him out into the dusty Jerusalem streets where a prison wagon was waiting. Roughly, they thrust him into the crowded carriage ribbed with iron bars and there, in the faint light of early dawn, Peter recognised the tired faces of his fellow inmates. It was his friends: Andrew, James, John, Philip, Thomas, Matthew, James (the son of Alphaeus), Thaddeus, Simon, Matthias, and Bartholomew the other apostles of the Lamb and the original founders of the Church.

The high priest had exercised his political power and commanded that these disciples of Jesus be rounded up like ordinary criminals to be incarcerated in a common prison. But with the evening would come an extraordinary miracle. Acts 5:19 says, “But the angel of Lord by night opened the prison doors and brought them forth.” What a glorious deliverance! What an incredible testimony! God had demonstrated His power once again, and these early followers of Jesus must have felt invincible.

I think what happened next is typical of human nature. It would appear that in the midst of great victories, a sleepy cloud of complacency had dulled some of the believers’ spiritual senses.

In Acts 12, we read that the persecution against the Church continued. But this time it was Herod who had initiated the arrest and instead of seizing all the apostles at once, he started with just one – James, the brother of John. Everyone assumed that James would be fine. After all, God had delivered the apostles from prison once before, and surely, He would do it again . . . or would He? We read of no prayer meetings, no vigils, and no intercession. All was well, and no one was concerned until the tranquillity was shattered and the Church was devastated by the dreadful news: James was dead, executed at the hands of the wicked ruler.

Complacency is one of the most dangerous enemies of the believer because it is so easy to fall into and, like a vivid dream, it is very difficult to detect in our own lives before we are rudely awakened. God is so good and faithful to us in His mercy. But it is easy to take His faithfulness for granted in the good times and confuse presumption for faith.

Someone once said, “Complacency is a blight that saps energy, dulls attitudes, and causes a drain on the brain. The first symptom is satisfaction with things as they are. The second is the rejection of things as they might be. ‘Good enough’ becomes today’s watchword and tomorrow’s standard. Complacency makes people fear the unknown, mistrust the untried, and abhor the new. Like water, complacent people follow the easiest course – downhill. They draw false strength from looking back.”

In nations, in individuals, in families, and business, complacency has the same effect; it is the enemy of victory and the ally of defeat. In no other area is complacency so lethal as in the prayer life – especially when everything is going well.

We hope you enjoyed this Bible Study by Daniel Kolenda. Be on the lookout for the next teaching UTTER DEPENDENCE. 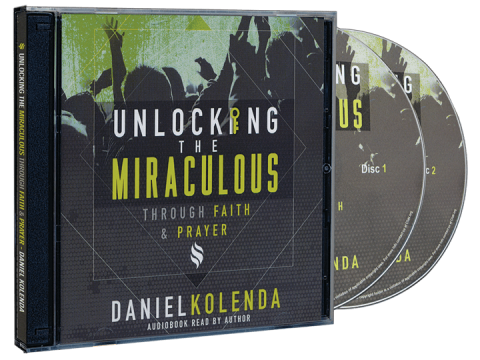 “The prayers of the believers were the power that loosed the chains, removed the obstructions, and opened even the most impenetrable doors.”– Daniel Kolenda

“I find that the more secure we feel, the more danger we are in, because it is in comfort that we can so easily forget our utter need for God.”– Daniel Kolenda