“Whatever God’s dream for your life might be, one thing is for sure: His will for your life is beyond what you could ask or think” - Daniel Kolenda.

Have you ever felt like there was something missing in your life; as though you had been written off, or were losing out on all that God has for you? Have you ever been tempted to believe you were too flawed to ever be beautiful or significant?

Or maybe there’s someone you care about who’s caught in a mental trap like this?

God is the master artist, the author and engineer of your life - and perhaps this ministry letter is particularly important and meaningful for you right now.

In the imagination of the artist …

I’d like to start with the following true story.

In the early 1500’s a twenty-five-year-old artist and sculptor laboured tirelessly with hammer and chisel over a colossal block of cold granite. Other artists had rejected the stone because it had defects, so it sat untouched for several decades before this young sculptor saw something beautiful in it.

He worked night and day with obsessive dedication. Someone asked him why he was working so hard on that old stone, he replied, “Because there is an angel in that rock that wants to come out.” Nearly three years after starting his work, the young artist, Michelangelo, unveiled his masterpiece: the seventeen-foot-tall sculpture that is now known the world over as “David”.

Anyone who is an artisan will acknowledge that before a masterpiece is ever crafted, it exists in the mind of its creator. Before a brush strokes the canvas, before a chisel touches the stone, before the clay is placed on the potter’s wheel, before the artist creates a painting, sculpture, or piece of pottery, before the artist has anything tangible to display, he first and foremost has a dream. In the artist’s mind, he already sees what he will create before it exists in the physical world.

Michelangelo saw something in that block of stone long before anyone else did. Other artists saw impossible defects and imperfections, but he saw a masterpiece trapped in that rejected rock, and he worked diligently to set it free.

Our God is the architect of the universe. He spoke the worlds into existence yet - at the same time - He saw every detail down to the smallest particle while there was still nothing. He crowned His creation with a masterpiece, which was highly distinguished because it was ‘handmade’ by the great creator. He crafted Adam with His own hands and breathed into him through His very own mouth.

Then the Lord God formed man of dust from the ground, and breathed into his nostrils the breath of life; and man became a living being. Genesis 2:7 (NAS)

He continues to fashion mankind with His own hands.

Think of it - you are handmade. The Master of the universe, the eternal, immortal, invisible, all-wise God, made you with His own hands. You are a unique creation, an intentional work of art crafted by the hand of the master artist. His will for your life is beyond what you could ask or think.

Throughout your life, no matter where you go or what you do, whenever God looks at you, He sees inside of you the potential He placed within you.

You can know that He wants to take your life from the junkyard of deceitful fears and flaws that come from past experiences ... and turn it into a fresh masterpiece, a trophy of His amazing on-going grace and mercy.

We mostly see our incompleteness, yet God sees His masterpiece in you!

You see, we feel we’re in the midst of an historic sovereign outpouring of the Holy Spirit. As we travel from city to city throughout Africa, what we see Him genuinely doing is utterly amazing and unmistakably supernatural. We know that what He is doing for others on the mission field, He can do for you. He longs to reveal His great power to each and every one of us.

Where are you right now? Where do you need God’s direct intervention?

Abraham and Sarah were childless before Isaac came. Moses was being chased by Pharaoh’s army before God parted the sea. Elijah was hungry and without food before God sent the ravens to feed him. Shadrach, Meshach, and Abednego were thrown into the fiery furnace before God rescued them. Jairus’ daughter was dying before Jesus showed up. Mary and Martha watched their brother, Lazarus, die before he was raised from the dead.

If you have a need in your life that only God can fix, you are in the exact place where the Master Artist can show up and move in your circumstances with beautiful brush strokes of His grace and power. No matter how great your problem may be, it’s not too great for God!

He’s still the One who made Abraham a first-time father when he was 100 years old. He’s the same God who parted the Sea for Moses, fed Elijah, protected Shadrach, Meshach, and Abednego and raised Lazarus from the grave.

Turning ashes into beauty is not an auxiliary benefit of the Christian experience; it is the heart of the Gospel, and it’s God’s will for you!

Come to God in prayer, in complete freedom, and ask Him to show you how He sees you, what you mean to Him and how important you are to Him. He gave everything for you.

He who did not spare His own Son, but delivered Him over for us all, how will He not also with Him freely give us all things … Christ Jesus is He who died, yes, rather who was raised, who is at the right hand of God, who also intercedes for us. Who will separate us from the love of Christ? Will tribulation, or distress, or persecution, or famine, or nakedness, or peril, or sword?
Romans 8:32-35

God sees the potential in your life. And He is in the process of bringing it forth. His will for your life is far above anything that you can ask or think! Trust Him, go further with Him, hold tightly to Him. Exactly as Michelangelo once called a masterpiece out from an ordinary block of stone, so God calls you:

Come forth! You are my masterpiece! 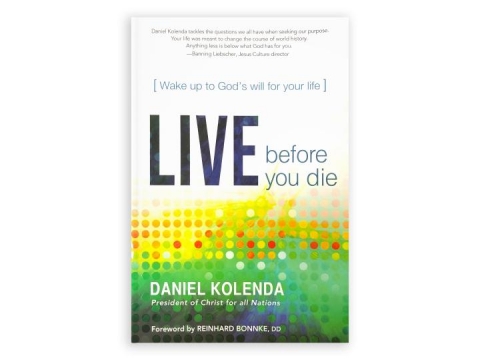 Live Before You Die ( Book )

God has a plan for everyone. Do you know yours?

Live Before You Die was written to help you discover God's will for your life.