The only other book in the Bible to mention “Magi” is Daniel. About 600 years before Christ, the Babylonians started to take Jews into exile. A young Hebrew named Daniel was among the first to go, and his story in Babylon is where the Bible introduces us to the Magi. Daniel’s life is fascinating because of the extraordinary extent to which revelatory dreams and supernatural prophetic activity opened doors for him. As a man with the prophetic Spirit, Daniel became influential in the highest places of power – even advising the ruler of Babylon, King Nebuchadnezzar, himself.

One night, that king had a dream:

"Now in the second year of Nebuchadnezzar’s reign, Nebuchadnezzar had dreams; and his spirit was so troubled that his sleep left him. Then the king gave the command to call the magicians, the astrologers [in Greek, “magi”], the sorcerers, and the Chaldeans to tell the king his dreams. So they came and stood before the king. And the king said to them, ‘I have had a dream, and my spirit is anxious to know the dream.’ Then the Chaldeans spoke to the king in Aramaic, ‘O king, live forever! Tell your servants the dream, and we will give the interpretation.’

He was determined to find and murder this baby.

The Roman Senate had entitled Herod the Great, who was ruling over Judea, “king of the Jews.” But he was just a puppet of the Roman Empire. He had no rightful claim to the throne of David. Like most rulers of his day, Herod was paranoid and superstitious. So when eastern astrologers showed up claiming that a star led them to Judea in search of a Child prophesied to be “King of the Jews,” Herod could not have felt more threatened. He was determined to find and murder this baby. So he called his own “wise men” – Jewish chief priests and scribes – and learned from them exactly where the Messiah would be born.

Now this is amazing. Herod asked Jewish priests and scribes the specific place of Messiah’s birth. Consulting the Hebrew Scriptures, they gave him the precise location. But how could they know where their own Messiah had been born and yet seem totally disinterested?

What’s more, Jesus was no longer an infant by this point. He could have been as much as two years old (Matt 2:16). Surely there were rumours of His birth throughout Israel. Luke says that the shepherds “made known abroad” what they had seen and heard (Luke 2:17).

Anna and Simeon had both received divine confirmation that Jesus was the Christ. Word was undoubtedly spreading. These rumblings, combined with the direct knowledge from Scripture, should have caused all Israel to look for this newborn King. Yet no kings, priests, scribes or religious leaders in Israel acknowledged Him. None of them bothered to seek Him, much less worship Him. The Jewish leadership seemed totally disinterested.

Keep in mind that these religious leaders were also politicians. Their prosperity and the security of their positions were ensured by the current Roman administration. Herod was their king. As long as he guaranteed their continued prosperity, they wanted no other.

The common people might have welcomed a Messiah, but those with position and power would have considered Him a threat. Messiah meant revolution – disturbing the status quo and endangering their profitable arrangement. No wonder Matthew tells us that, when Herod heard of the Magi’s search for another Jewish king, “he was troubled, and all Jerusalem with him." (Matt 2:3)

Pagan Magi came to worship the Messiah, but Jerusalem royalty sought to kill Him.

Despite the shameful neglect by the establishment in Jerusalem, God had already set a process in motion to honour the royalty of His Son. Six hundred years earlier, under Daniel’s leadership, pagan “wise men” – including a group of magi – began to learn about the Jewish Messiah’s advent and mission. After centuries of changing empires, that legacy culminated in magi travelling from the east to worship Jesus with precious gifts, and to acknowledge Him as King.

In telling us this story, Matthew illustrated a pattern that would repeat throughout the life and ministry of the Messiah. “He came unto His own, and His own received Him not” (John 1:11-13). He was without honour in his own country (Luke 4:24). He was the “stone that the builders rejected” (Mat. 21:42, Mark 12:10). He was ultimately spurned and killed by His own people. All of this fulfilled the prophetic Scriptures about the Messiah.

Matthew also expected his readers to catch the striking irony: Gentile astrologers from the east discovered the Jewish King by following a star. But scholars of Israel failed to discern their King while possessing the Scriptures. Pagan Magi came to worship the Messiah, but Jerusalem royalty sought to kill Him. The contrast was sharp, startling and prophetic.

These Magi were the first Gentiles to worship the Jewish Messiah as King, even when the religious establishment had rejected Him. But they were only the beginning. Later Gentiles would come to Him by the millions and even billions. That was always God’s intention. Thus at the end of Matthew’s Gospel, King Jesus commanded His followers to make disciples “of all nations” (Matt. 28:19). Then the last book of the Bible reveals the end result.

God has provided the way to save all who believe.

The legacy that began with Daniel’s ministry as far back as the ancient Babylonian empire, then became a trickle of Magi from the east to worship Jesus, would culminate with a deluge of multitudes from every nation under heaven:

“After this I looked, and behold, a great multitude that no one could number, from every nation, from all tribes and peoples and languages, standing before the throne and before the Lamb, clothed in white robes, with palm branches in their hands, and crying out with a loud voice, ‘Salvation belongs to our God who sits on the throne, and to the Lamb!’”(Revelation 7:9, 10).

The message of the Magi declares that the Jewish Messiah is Lord of all nations. God has provided the way to save all who believe. One day, people from every tribe, kindred, and tongue will gather as one family to confess that Jesus Christ is Lord to the glory of God the Father.

Then let us all with one accord
Sing praises to our heavenly Lord;
That hath made heaven and earth of naught,
And with his blood mankind hath bought
(“The First Noel” Unknown Author, 17th century)

Look for Part 5 entitled, "God Chooses the Weak to Shame the Strong." in the next few days. The insights given will truly enrich your devotional life! 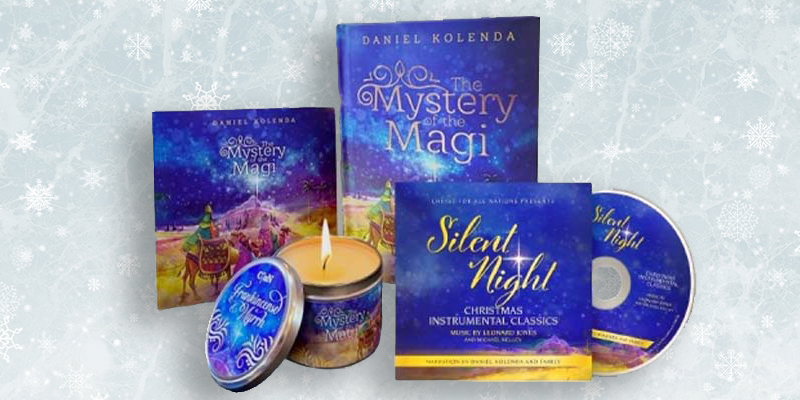