Brazzaville, Republic of the Congo

The capital city of the ‘Republic of the Congo’, Brazzaville, lies to the interior on the banks of the Pool Malebo, an enormous, sea-like extension of the Congo, the second-longest river in Africa. Kinshasa, the capital of the neighbouring country, the ‘Democratic Republic of Congo’, is situated on the shore directly opposite. As the Congo is only navigable above the Pool Malebo, a 510km railway line was built here in colonial times between 1924 and 1934.

The Republic of the Congo lies on both sides of the equator, and therefore has a typical tropical climate with two rainy seasons (January to May, and October to mid-December). More than half of the country is covered in tropical rain forests.

This country, which has a surface area of roughly the same size as Germany, is very thinly populated. There are just over 5 million Congolese people.

Even though most of the population describe themselves as Christian (with about 40% of them Catholic), there are widespread problems in Africa with the mixing of Biblical teaching with old, ‘traditional’ belief systems, ancestor worship and so on. Some sources state that over 40% of the population still believe in pagan animism.

There are so many children being born that the average age in these countries is astonishingly low. In the Republic of the Congo, it’s only 16.8 years (in comparison: in France, it’s about 40 and in Germany it’s 45). That means that more than half of all the people there are children or teenagers. A completely new generation is growing up – and it’s for them that the salvation message must be declared anew. That’s what Jesus has called us to.

Please pray with us for:

Thank you so much for your help!

Africa shall be saved!

WHAT DOES IT MEAN FOR OUR TECH TEAM TO 'JUST DRIVE' TO THE CONGO?

3,300 km of driving and sweating for the Gospel…

We absolutely believe that the Lord has called us to preach the Gospel there during our summer months. But what does that really entail? What does it mean for our tech team to “just drive” to the Congo? In this letter, I’d like to give you a glimpse behind the scenes. 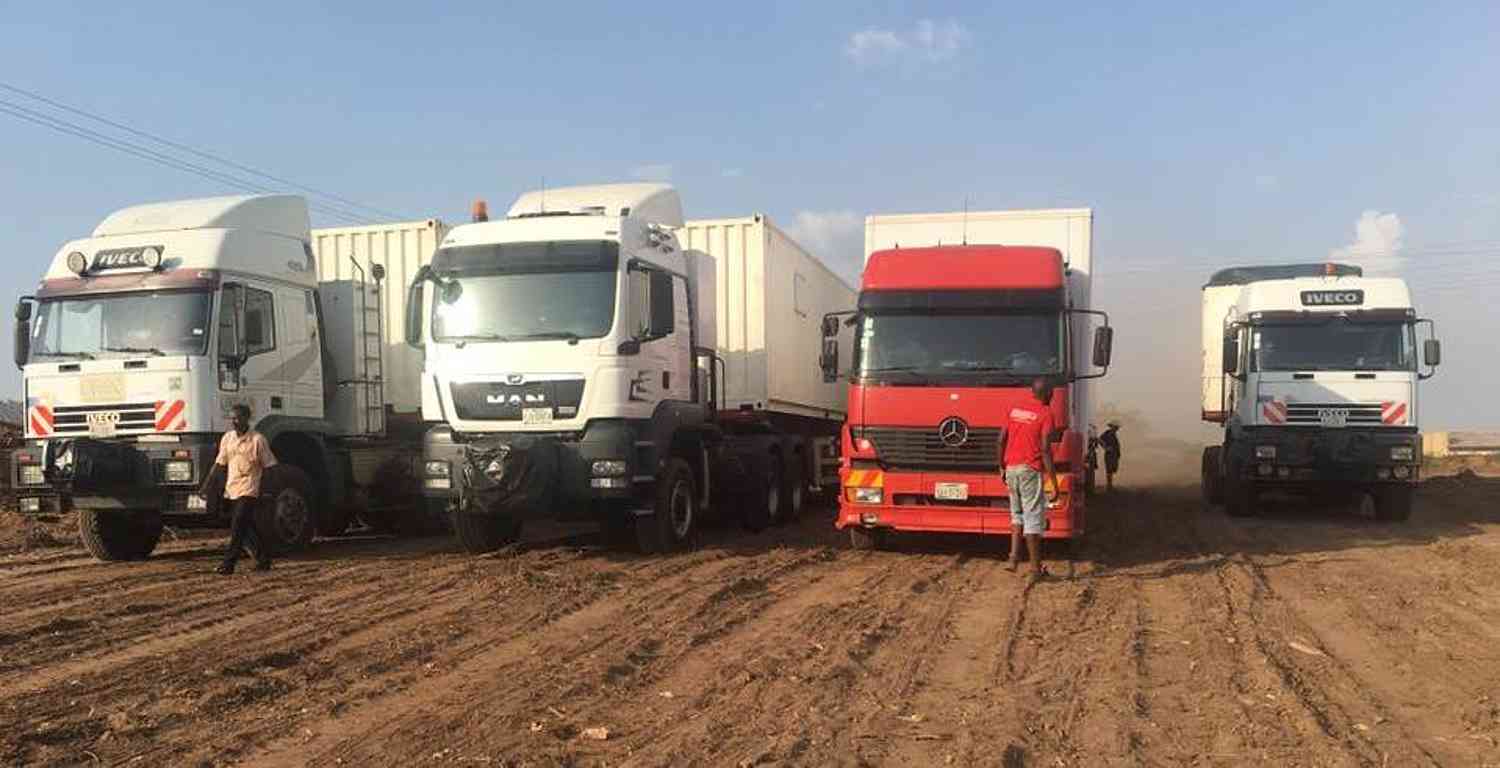 As you may know, our West African headquarters is in Lagos, Nigeria. Winfried Wentland, CfaN’s Field Director, is responsible for the organisation of our “trek,” made up of 4 trucks and an off-road backup vehicle. He drives one of the trucks himself and due to his vast experience on African roads, he knows that this route through 4 countries is a massive challenge for the people and the equipment. A team of 13 co-workers is travelling with him, including a new team member, Markus Ahrnke, for whom a trip of this kind is a first, although he was with us in action in Calabar.

The long journey begins in Lagos, in Nigeria’s gigantic metropole. The planning and organisation of all the customs and visa formalities – the transport, cargo, safety and shipping questions foremost – is often much more complicated than one can imagine, and brings a tremendous cost in time and patience. Everything must be sorted by the 12th of May, because that’s when the loading begins, a painstakingly accurate job that takes years of experience and much careful planning. A huge amount of sensitive technical equipment – in which you may well have invested – must be safely and efficiently packed.

Amongst other thing, there are several generators to provide electricity, along with all their cables and accessories. Then there are the light masts and lights for the campaign field, as well as lights for the video cameras on stage. Add to that the entire stage with scaffolding, sections and flooring, as well as the open-air sound system with its two 12-metre-high aluminium sound towers and everything that goes with them (including 45 loudspeakers, steel rigging, winches and various mixing boards).

Since November 2017, we now also have the jumbo LED screens with their entire scaffolding and the extensive technical equipment required to run them. This takes a whole truck of its own to transport it. And we can’t leave the camera crane behind, along with all the video equipment, not to mention a vast quantity of work materials, tools, air conditioners and groceries.

And then there’s something of special importance that has to be taken with us, something vital for every CfaN campaign: hundreds of thousands of follow-up booklets; “Now That You Are Saved,” this time mostly in French.

The route begins in the Nigerian interior, going roughly 800 km east, and then South for about 2,000 km through Cameroon and Gabon. The team is expected to arrive in the capital city of the Republic of the Congo, Brazzaville, at the end of May, where they will prepare and set up everything in time for the CfaN campaign. There are only 5 million residents in the country, although it is almost as big as Germany in area.

Every time you support CfaN with your donations – and no gift is too small or insignificant to us – you’re helping to carry the burden of ensuring that we can load our technical gear up once again, putting equipment, co-workers and materials on the road to the African mission field.

Winfried knows all about the events and how important the careful management of donations is: “For the team, there’s no ‘holiday feeling’ attached to going on trips like this, and we certainly don’t just do it for the sake of adventure. We are all utterly convinced that through our work each time, hundreds of thousands of people will accept Jesus Christ as their personal Saviour. That’s what drives us, and it’s what makes all the effort and sweat worth it!”

Please help us to make sure that the work of Winfried and his technical team in the Republic of Congo is a rousing success for the Kingdom of God when Peter and I preach the Gospel – clearly and without compromise – in this wonderful and unusual country this Summer. It’s another step toward fulfilling the grand vision, that all of Africa shall be saved!

Together with you in Jesus,

PS. Please pray for Winfried and his team:

We have just returned from the first meeting of our gospel campaign here in Brazzaville, Congo. It is the first time we have been back to this city in more than 25 years. The average age in this country is under 17 years old. That means there is now a whole new generation on the scene, many of whom were not even born when CfaN was last in Brazzaville.

You may have heard about the many difficulties and challenges we encountered to get here. In fact, we were supposed to have had a campaign here last month that had to be cancelled because of these challenges. It was the first time in the history of the ministry that our equipment did not arrive in time for the campaign – even though they had journeyed for more than eight weeks to get here. Have a look at the video above to get an idea of what it took our team to get here.

There are many stories we cannot tell, but suffice it to say that the very fact that no one in our team was hurt or killed on that perilous journey is itself a great testimony. My journey was also beset with difficulties. Peter Vandenberg and I only arrived early this morning. After more than two days of travel our plane landed at 5 AM and Peter was already preaching in the fire conference by 8 AM.

After tonight‘s opening meeting it is clear to us that the enemy tried to prevent us for good reason. There is a great hunger and anticipation here. People responded to the gospel with enthusiasm and many thousands responded to the preaching of the gospel. After the prayer of salvation, I prayed for the sick and the power of God began to move on the massive field. Even as I was praying many demon possessed began to manifest. Many lame walked, paralysis vanished, pain disappeared and many other miracles took place.

A young man had broken his ankle in 2007 and since that time his foot had been turned to one side forcing him to walk painfully on its outer ridge. Tonight, his foot straightened out, his pain left and he was able to walk so perfectly no one could have ever guessed he was so mangled just moments before. 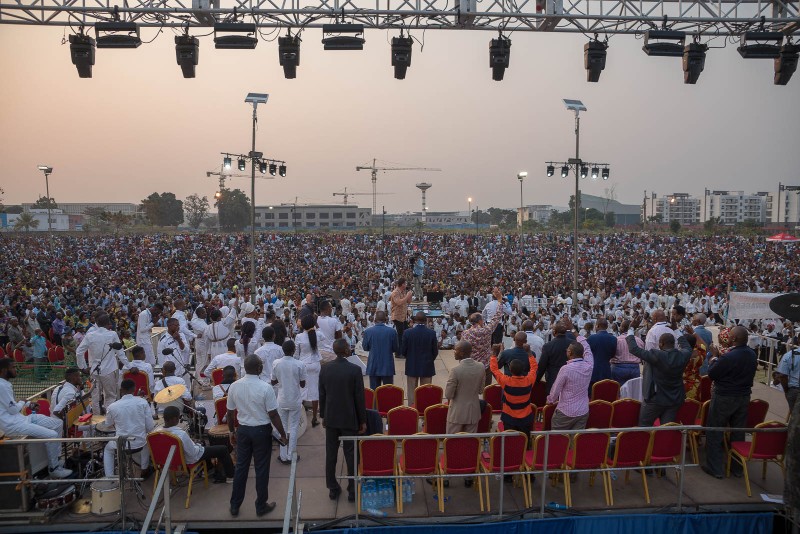 A man with paralysis on his left side from a stroke received full use of his left arm and leg.

We heard testimonies of lungs, eyes, arms and legs being healed and many more. And this is only the beginning.

Please keep us in your prayers through the rest of this week as we continue to work in this ripe harvest field. The best is yet to come...

SHAKEN BY THE GOSPEL

Brazzaville, Congo is being shaken by the gospel! Tonight, on our second evening of this campaign, I preached on the blood of Jesus. Many thousands surrendered their lives to Jesus and many wonderful miracles happened. There are far too many to mention, but have a look at the pictures – they will give you some idea of what is happening. This morning, Peter Vandenberg and John Darku ministered to the pastors and church leaders at our Fire Conference with great anointing. Tomorrow morning the Fire Conference will climax as we pray for those present to receive the Baptism in the Holy Spirit. We are anticipating a powerful day, both morning and evening. Please continue to pray for us. We are expecting great things.

Today has been a day of Holy Spirit outpouring, both morning and evening here in Brazzaville, Congo. This morning the Fire Conference concluded as Peter Vandenberg and I ministered to the pastors and church workers. Afterwards, we prayed for them to receive the baptism in the Holy Spirit. I laid hands upon hundreds of senior pastors who, in turn, laid hands upon the thousands present. Tonight, with the huge crowd in attendance, we prayed again for the people, many of them brand new converts, to receive this glorious gift. The place was shaken. Even before we started praying the Holy Spirit began to move across that huge field. From my vantage point on the platform I could see many people all over the field spontaneously dropping to the ground as they were being overwhelmed. Many miracles of healing also took place.

There is so much more to tell. We could not hear all the testimonies because there were so many. Indeed, many hundreds of people said that they had been healed tonight. Jesus is alive in Brazzaville!

Tomorrow is the final meeting. Please continue to pray for us.

The last meeting of our campaign here in Brazzaville, Congo has just come to an end. It was a glorious week. Many thousands of salvations and healings. Have a look at the pictures.

Now we turn our attention back to Nigeria as our team makes preparations for a long and arduous journey back through very difficult and dangerous terrain. Please keep them and us in your prayers.

We’ve received a fantastic report from our recent Brazzaville, Congo Gospel Campaign. The decision cards were returned. 201,670 people gave their lives to Jesus and have now been helped into our follow up system! Please pray for all of the local churches working with the new converts to make disciples.

Thank you for your prayers! Heaven is rejoicing!